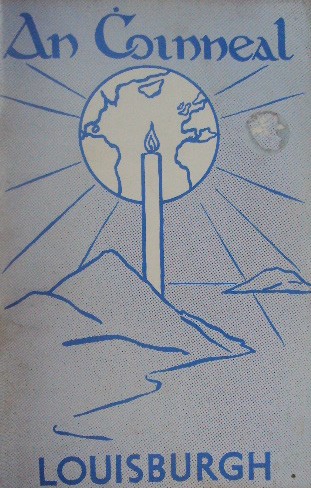 A Break In Routine

For two weeks we had looked forward to the day. It was the general topic on the corridors and in the cloakrooms. The minutes between the classes, which at other times were spent in last minute efforts to solve that problem in Algebra or perhaps trying to remember the intricacies of Ptolemy’s theorem, were now spent in speculation about the great event. The matter in the prescribed texts began to take on a deeper meaning for us, like Macbeth’s soliloquy: “If ‘twere done when ‘tis done, then ‘twere well it were done quickly,” or Horace’s Ode: “Carpe diem, absint luctus, turpes et querimoniae.” In the science hall the conversation between the pair at every experiment was more often concerning the forthcoming day than the reaction taking place in the test tube. The school was to go on an educational trip to Dublin and the tension was mounting as the day drew near, because for the majority of us it would be our first visit to the city.

It was 7am and the alarm clock was whirring at the bedside as if saying angrily that it was time to get up and start another day. By some freak of the unconscious, known perhaps to depth psychology. I found myself on my knees to start the Morning Offering. I must confess the Offering got a rather hasty finish as I suddenly realized that at last the day had come!

My next door companions greeted me heartily and we hurried to the bus stop gaily and, I fear, vociferously. It was one of those glorious May mornings and to us it seemed as if the sun was shining even brighter than usual. Was it that it was just an exceptionally fine day? Perhaps it was that we were in such a happy mood we imagined that Nature also was rejoicing. From the crossroads we had an uninterrupted view of an immense span of countryside bathed in early morning sunshine. Westwards, a trickle of grey smoke from a chimney in Doughmackeown presented a pale contrast to the blue ripples of Loch Ceas and the deeper blue of the then peaceful Clew Bay in the background. The vivid green of the dooaghs stood out in bold relief from the gold of Carrowniskey strand. Creigean an Aifrionn, clothed in a mantle of glowing heather, stretched away to the north. Its name recalled a time when the people of our villages gathered at the cairrig to assist at Mass where now is heard only the lonely bleat of the flock. Probably too, those same people had often come to a ceili at the crossroads where we now stood.

In Louisburgh we were joined by more of our school companions and in a deep breathing, excited mood we left behind us Mooneen, Oldhead and Falduff and soon we were speeding round the foot of Croagh Patrick. The early morning train rattling out from Westport station was an alarm, as it were, for the people near whose houses it passed. The west seemed yet asleep and it would be asleep again on our return tonight. Gradually we left behind us the scenic mountain beauty of Connacht and gradually the picture changed to the lively green of the rolling pastures in the midland limestone plains. This in turn soon gave way to the huddled looking back gardens of suburban Dublin; and television aerials taking the place of the fuschia hedges, were the first indications that we were nearing the capital.

It was a busy day in this spacious and gracious city, as it was the opening day of the Spring Show at Ballsbridge. A specially chartered bus took us to the Show where we had the opportunity of feasting our eyes on this shop-window of Irish agriculture and industry. There was the large industrial section where all the leading firms had their stands. An attractive selection of hand woven tweeds, Waterford cut glass, Irish lace and linen, and hand molded pottery was of particular interest to us. The farm machinery display was another magnificent site, but probably most fascinating was the horse jumping section. Looking on, one could well understand why Ireland is famous for its splendid horses and superb riding. The showgrounds were cheerfully crowded and one could spend days exploring them, but time did not permit.

Back on the bus again, a lively discussion was started as everybody described in his own individual fashion what he had seen. We were soon interrupted by our guide, however, who in the voice of a well read historian, informed us about the historical background of the various buildings by which we passed – Trinity College, the Castle and the Four Courts. Our route was through the streets in the older part of the city, streets that are grey with time and murmurous with the echoes of history. If only those streets could speak, what historical tales they would tell – of Robert Emmet and Lord Edward, of Pearse and Connolly and the men of 1916! Our next stop was the zoo. For most of us it was our first visit here, but the interest displayed by the younger members of the group was particularly noticeable. Standing near the lion’s enclosure, one could not help thinking that this animal must not be too unlike Milton’s Satan of Paradise Lost “with head uplifted inside the cage and eyes that sparkling blazed.” The zebra and camel seemed particularly interesting and the long-necked giraffe made his presence felt by rubbing his coarse tongue along M—‘s face who thereby released a sensational shriek that caused a roar of laughter when the cause of disturbance was discovered! The wild-bird section brought home to us, more than anything else, the beauties of Nature. One leaned against the railings and became unconscious of his surroundings as he studied the different shapes and sizes, the beautiful colours and the amusing habits. Time was slipping by, however, and although we would have liked to stay there longer, we left the zoo with the determination of visiting it again at the next opportunity.

A visit to Dublin’s ultra-modern airport was something not to be missed and we arrived just in time to see a plane coming in to land. It was a source of pride to see that Ireland has stepped into line with the most modern airports – Dublin airport is one of the crossroads of the world’s airways. We watched a jet as it taxied along the runway: the next moment it had gone, leaving behind a white trail of smoke as it headed westwards. With its sudden departure came the realization that soon we must too start our journey westwards. It was strange to think that this plane, perhaps, would soon pass over our own parish; that people in Doughmackeown or Carrowniskey fields would rest a spade and look up at it for a few seconds; and that before we would have arrived back in Louisburgh in the shadow of Croagh Patrick, that plane would have already touched down in the shadows of New York!

The journey homewards was spent in discussing the events of the day, reiterating in particular the humorous happenings. Drawing near Westport, however, as I walked along the corridor, I noticed H – slumped at a rather awkward angle in a corner of the compartment as he lay, “asleep, (Francis Ledwidge would have said) like drunken Noah in the shade.”