You are here: HomenextTopicsnextAn CoinnealnextMigration from Mayo to the Midlands

Migration from Mayo to the Midlands

In April 1951 the Irish Land Commission moved the Nee family from Curradavitt, Killeen to Sneeogue, Duleek, Co.Meath. In 1953 the Coyne family made the transition from Aillemore to Barlath, Kentstown, also in Co.Meath. 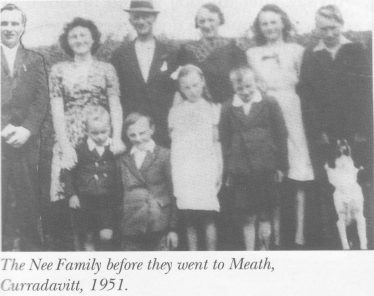 The Nee Family before they went to Meath, Curradavitt, 1951.

I was not yet twelve years of age when I left Killadoon National School. I remember the family and friends and neighbours bringing our belongings, cattle, sheep, dog and horse to Killeen crossroads to be loaded into lorries for transport across country to our new home and village, Sneeogue. It was a sad farewell leaving friends and neighbours as we made our way to a new life in Meath.

Paddy Nee didn’t agree with the Nee move to Meath. For him, the month of April was a sad month in Curradavitt. “I was 20 years old and came home from England to help out with the move”, says Paddy in New York. He continues, “I was sad leaving my school friends. I will never forget the day we moved, all our neighbours from the village around were in Curradavitt and they were also sad. Old men were crying. Michael Needham, Walter Egan, Stauntons, Davitts, O’Malleys, O’Gradys and Pat Philip were there as was Paddy Kneafsey who got the turf fire on and everybody was welcome.

“On the morning of the move we drove the cattle and sheep and horse to Killeen; everything else was loaded on horse carts and taken down to the crossroads. Thady Arthur O’Malley took over the drive of the livestock. The dogs were barking and Thady loved it. It was early in the morning and he woke everyone in Aillemore with the dogs barking. We had lots of help from Feenone and Aillemore. Waltie Egan, God rest him, was a great help to us all.

“In Killeen, I put my dog in one of the trucks and rode with the driver to Meath. It took the truck over eight hours to get there. I cried a bit, slept a bit and took care of my dog. Anyway, later the dog wound up down in Bundorragha. He needed hills as he was a mountain dog. I stayed at home for six months and then went back to England for two more years. From there, I went to New York.

“I always call Curradavitt my home. I missed Mickey Keane’s dances and school friends, but it was always home to Mayo for me.” 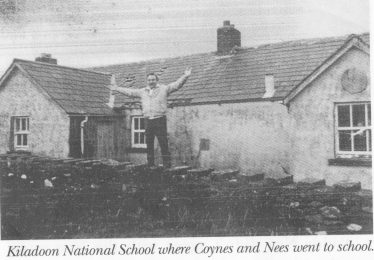 Kiladoon National School where Coynes and Nees went to school.

When we reached Sneeogue and our new home we found that seven families from Bohola, Kiltimagh, Belmullet, Swinford and Castlebar had arrived a few days ahead of us. They were most welcome and hospitable. We needed one another in the then village of seven families. There are now over thirty homes there and Duleek is only twenty miles from Dublin.

The Land Commission were striping/ dividing land in Mayo, Galway, Leitrim, West Limerick and Kerry since the 1930s and were buying the big ranches in the former Pale for the resettlement of folk from the overcrowded areas of the west and south.

John O’Grady of Cregganbawn says that the eight families who moved from Cregganbawn to Kiltoom in 1955 benefitted as well as the families left behind in Shrawee, Althore, Falduff and Cregganbawn. 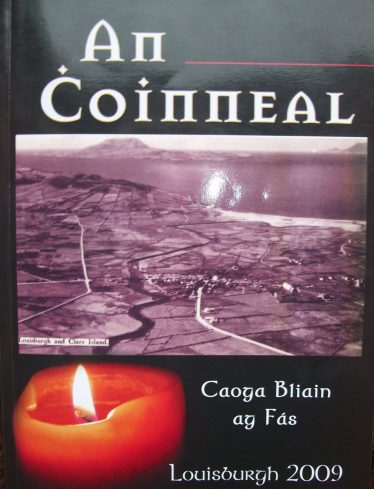 Liam Davitt spoke of the grief and emotional loss in the community, church and school with the move of so many families to the midlands.

The new influx/ injection of people from the west and south of Ireland enriched the under-populated Midlands; indeed the Meath team at one time was nicknamed the Land Commission Team as many of its members, Lyons and O’Malley’s for example, had their origins in the west

In the 1930s and ‘40s many families had moved to Kildare and also to the Gibbstown area near Navan where one road is still called Mayo Road. Many families came to the Rudder, Bellewstown, The Reask, Athcarne, Duleek, Rathfeigh and Tara areas. Those who came to Rathcairn were mainly from Connemara. We now have a thriving Gaeltacht in Rathcairn where Mass as Gaeilge is celebrated every Sunday.

Shortly after we arrived in Meath, I will always remember the visit of the Sligo man Louisburgh Curate, Fr. Martin, to our new home. He walked the farm and blessed it. Later the Parish Priest of Duleek, Fr. McLoughlin came and celebrated Mass in our house. It was he who advised that I attend the CBS Secondary School in Drogheda.

Integration took place quickly through Church, school, inter-marriage, sports and the GAA. We had a Mayo Association in Navan and the Westmeath migrants had re-unions between Louisburgh and Castlepollard. Michael O’Grady of Old Head penned the wonderful song, From the Creggans to Kiltoom, in October 1990 [and re-printed elsewhere in this issue of An Choinneal – Ed.]