Memories Of My Father 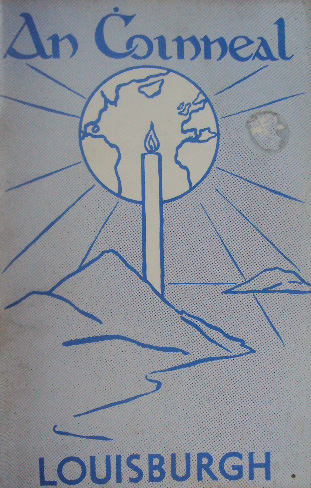 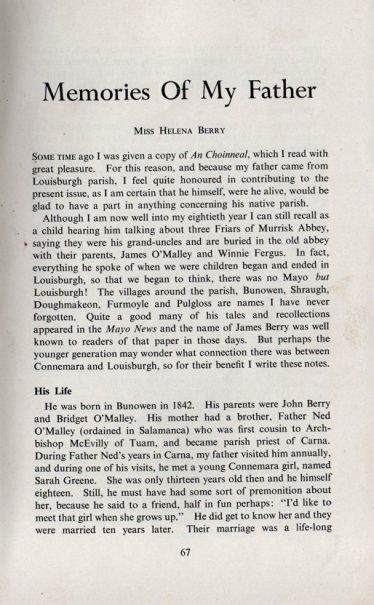 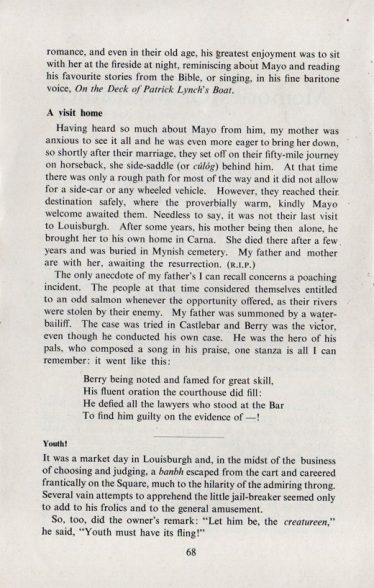 Some time ago I was given a copy of An Choinneal, which I read with great pleasure. For this reason and because my father came from Louisburgh parish, I feel quite honoured in contributing to the present issue, as I am certain that he himself, were he alive, would be glad to have a part in anything concerning his native parish. Although I am now well into my eightieth year I can still recall as a child hearing him talking about three Friars of Murrisk Abbey, saying they were his grand-uncles and are buried in the old Abbey with their parents, James O’Malley and Winnie Fergus. In fact, everything he spoke of when we were children began and ended in Louisburgh, so that we began to think, there was no Mayo but Louisburgh! The villages around the parish, Bunowen, Shraugh, Doughmakeon, Furmoyle and Pulgloss are names I have never forgotten. Quite a good many of his tales and recollections appeared in the Mayo News and the name of James Berry was well known to readers of that paper in those days. But perhaps the younger generation may wonder what connection there was between Connamara and Louisburgh, so for their benefit I write these notes.

He was born in Bunowen in 1842. His parents were John Berry and Bridget O’Malley. His mother had a brother, Fr. Ned O’Malley (ordained in Salamanca) who was first cousin to Archbishop McEvilly of Tuam, and became parish priest of Carna. During Fr. Ned’s years in Carna, my father visited him annually, and during one of his visits he met a young Connamara girl named Sarah Greene. She was only thirteen years old then and he himself eighteen. Still, he must have had some sort of premonition about her, because he said to a friend, half in fun perhaps: “I’d like to meet that girl when she grows up”. He did get to know her and they were married ten years later. Their marriage was a life-long romance, and even in their old age, his greatest enjoyment was to sit with her at the fire side at night, reminiscing about Mayo and reading his favourite stories from the Bible, or singing, in his fine baritone voice, On the Deck of Patrick Lynch’s boat.

Having heard so much about Mayo from him, my mother was anxious to see it all and he was ever more eager to bring her down, so shortly after their marriage, they set off on their fifty-mile journey on horseback, she side-saddled (or cúlóg) behind him. At that time there was only a rough path for most of the way and it did not allow for a side-car or any wheeled vehicle. However, they reached their destination safely, where the proverbially warm, kindly Mayo welcome awaited them. Needless to say, it was not their last visit to Louisburgh. After some years, his mother being then alone, he brought her to his own home in Carna. She died there after a few years and was buried in Mynish cemetery. My father and mother are with her, awaiting the resurrection (R.I.P.).

The only anecdote of my father’s I can recall concerns a poaching incident.  The people at that time considered themselves entitled to an odd salmon whenever the opportunity offered, as their rivers were stolen by their enemy. My father summoned by a water bailiff. The case was tried in Castlebar and Berry was the victor, even though he conducted his own case. He was the hero of his pals, who composed a song in his praise; one stanza is all I can remember:  it went like this:

Berry being noted and famed for great skill,

His fluent oration the courthouse did fill,

He defied all the lawyers who stood at the Bar,

To find him guilty on the evidence of ——!

It was a market day in Louisburgh and, in the midst of the business of choosing and judging, a banbh escaped from the cart and careered frantically on the Square, much to the hilarity of the admiring throng. Several vain attempts to apprehend the little jail-breaker seemed only to add to his frolics and to the general amusement.

So, too, did the owner’s remark: “Let him be, the creatureen,” he said, “Youth must have its fling!”