You are here: HomenextPlacesnextLandmarksnextMayo's First Airstrip! 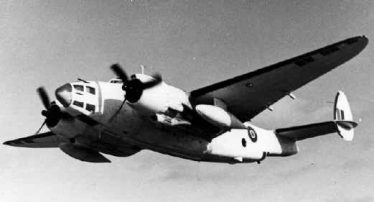 On a cool morning in late September 1942, we left home at 9 O’clock for the half hour walk to Accony School, not feeling too happy at the thought of a new school year stretching out ahead of us. The weather was a little foggy with a slight drizzle but this soon cleared up and the sun appeared through the clouds.

We were experiencing a very unusual period in Irish country life at that time, World War Two was raging in Europe. Ireland was not involved in the war as it was a neutral state, but the fallout from it brought lots of hardship and unusual sights and sounds

The noise of the aircrafts passing overhead daily on their way in from the Atlantic and heading east was a common occurrence. In those days, the planes flew much slower and lower and the propeller driven crafts were a lot louder than planes of today.

On this particular morning at around 9.15am as we approached Emlagh crossroads, there was an aeroplane coming down over Doughmakeon and heading west. We felt this was rather strange as previously they were always heading east and this plane was very low and appeared as if she was preparing to land. The pilot then opened the covers of the wheel wells and they hung down like two giant mould-boards of a plough.

The descent continued and in a couple of seconds the plane had landed. 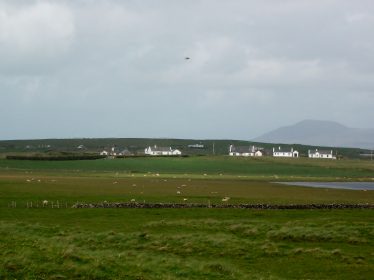 We left the school bags by the roadside and started running back to Emlagh village and down across the fields to where the plane was sliding to a stop on the Duagh.

Two local men, Charlie Prendergast and Joe Lyons were also there.  One of the crewmen alighted from the plane and his only concern was for us youngsters to stay away from the engine as it was red hot. We stood there in awe being so close to a real aeroplane, touch it, rub it and admire it.

I can still vividly see the navigators nest, in the very nose, a glass bubble with a small desk, with maps, compass, dividers and other instruments that draughtsmen or engineers would use. There was no major damage done to the plane even the glass bubble remained intact.

By now people were coming from all directions. The master, teachers and pupils from Accony School came down to have a look. The Coastguards and Civic Guards with Sergeant Deeley arrived soon afterwards.

The remaining crewmen came out, a casual conversation ensued between locals, guards and crew and all talked as if they had known each others for years. The Guards then left with the crew and took them to McDermott’s Hotel in Louisburgh where they were well looked after. We didn’t see them after that.

Next morning I went back again to see the plane, but everything had changed. The Irish army had a ring of steel around the area, you could not enter from the Doughmakeon side at all. As time went on it relaxed a little but it was never as casual as that first morning after landing.

Behind the scenes, it became evident that plans were afoot to remove the plane from the Duagh. Technicians and mechanics from the aircraft manufacturers arrived, they removed the two engines and wings, put them into crates and transported them away. They then lowered the landing gear (it was a wheels up landing) and towed the plane up the Duagh to the by-road in Doughmakeon.

The road had to be upgraded and widened all the way to the Killadoon/Louisburgh road to accommodate the large trailer with the remainder of the plane aboard. All this work took some time and it was a few days before Christmas 1942 that the plane finally left the area.

The event was talked about at every hearth in the village for many years and even today it occasionally gets a mention.

Several factors worked in its favour that morning. Firstly, the skill of the pilot, he picked his landing strip from the south east corner to the north west (the longest stretch), secondly, by lowering the wheel well covers, the plane sliced through the sandy soil giving stability to the structure, while she slid on her belly to a full stop.

The time of year was also a factor, the land was strong after a good summer, and the drizzle had made the grass slippery.

Thirty years later, one of the crewmen, his wife and friends came back to visit the area. The same plane and crew flew many more missions and all survived WW2

It is almost seventy years now since that eventful day but I still think of that morning from time to time and remember the good will and unity of purpose that prevailed which made all of us proud. 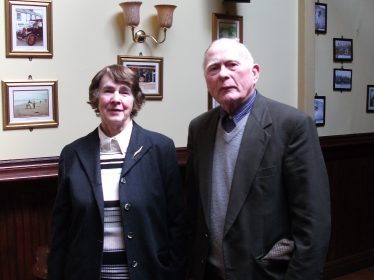