You are here: HomenextPlacesnextLandmarksnextClapper Bridge and the Colony

Clapper Bridge and the Colony

Some seven miles West of Louisburgh, near the villages of Killeen and Killadoon lies Bunlahinch Clapper Footbridge. It is a unique and interesting feature, with an interesting history. The bridge is a low, curving construction, 130ft long, formed of 38 boulders spanned by slabs of stone, and takes walkers across a wide but shallow ford. This picturesque and remarkable Clapper Bridge takes its name from the word Clapper which is the plural for the Anglo- Saxon word Clam and signifies a construction which is Roman in origin and consists of a row of two uprights crossed by a topping slab. 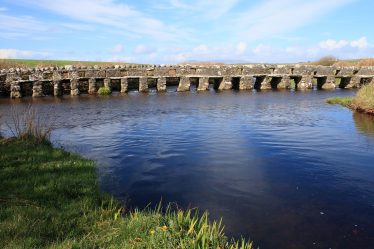 The area was formerly known locally as ‘The Colony’, but it’s past is seldom talked about and few are willing to recall the memories of its brief and shameful existence. This is because it was really known as a ‘Colony of Jumpers’, so called because the village came into being as a result of the practice known as souperism.

During the Famine many local people were forced to convert to protestantism just to gain sustenance. The local Church of Ireland Minister, the Rev. Callinan, was in the habit of providing soup to his congregation, who due to starvation were very vulnerable and so many catholics converted to the protestant faith just to survive.

As his congregation continued to expand, in 1853 Lord Sligo granted him an acre of land seven miles west of Louisbourgh, on which to build a new church. The church was dedicated in Irish and was attended by 300 people. As the location was in an extremely remote area and there were no roads as such, numbers began to fall and the congregation petered out. 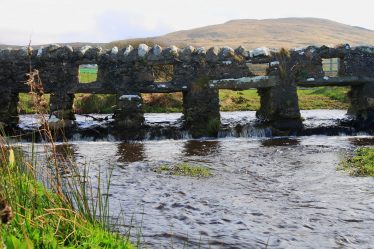 The Society for the Protection of Rights of Conscience took control of the church. The Secretary of the Society, a man named Hogan leased a further 193 acres from Lord Sligo and proceed to build ten or twelve two bedroomed houses for the converts together with a school for its inhabitants.

In 1863 John Alexander, who built the ‘Clapper Bridge’ across the streams that separated the two rows of houses, replaced Hogan as Secretary of the Society. Much of this effort was in vain however as the local people (other than the converts) strongly objected to the presence of the society and did nothing to encourage their farming endeavours. After only twenty years the society disappeared from the district, although their teacher, a Miss Mc Greal, remained for some years in the living quarters of the school.

Richard King purchased the land in 1878 from Lord Sligo for a figure of £650. Little remains today of the school and all that remains of the colony is the skeleton of 3 houses. The church was demolished in 1927 and all that is left are the entrance gates. The Clapper Bridge remains a unique and unusual monument, to a shameful period of Irish history.