You are here: HomenextPlacesnextLandmarksnextStrange Landmarks

Nothing could seem more unchanging that the big sprawling strand below us, its permanence measured out in the flood and ebb of the tide. But between the convulsions of memorable storms, this long sweep of sand at the end of the boreen seems to shuffle its grains into new contours every day. If it is not being pounded and pawed by the sea, there is a flood in the channel from the mountain river, so that fresh and salt waves rush headlong at each other. And when the water stops churning and retreats, the wind gets to work, scouring the strand so fiercely that stones and shells are left perched atop little columns of sand, like a host of petrified mushrooms.

The strand has two strange landmarks, each surviving a mysterious past and both now succumbing, year by year, to the embrace of sand and sea.

The first, remarked by every visitor, is a conical mound about thirty feet high and crowned by a few feet of ancient masonry. It is all that remains of and old graveyard, made on a grassy promontory that the sea encircled and then began to whittle away. There are stories of skulls spilling out on the sand, and of coffins intercepted at sea by the fishermen of Inishturk.

Last year, Ethna and I stumbled up from the strand with a rough slab of slate which was used as a headstone by a journeyman mason in the year 1811. We thought it might be appreciated by the descendants of the family whose names were so handsomely carved on it. But there have been no takers for what could, I suppose, be regarded as a melancholy, if not actually ill-omened, keepsake.

In local lore, the graveyard was made at the site of an old monastery built by “renegade” monks from Inishbofin, the long, low island on the horizon. The story is qualified ironically in a footnote in Helen Waddell’s “Medieval Latin Lyrics”. It recalls that Colman, bishop of Lindisfarne (661-668), came back to Ireland and founded the monastery in Inishbofin with thirty Englishmen and many Irishmen who came back with him.

“But there was no peace among them, says Bede, for when the summer and the time of harvest came the Irish took a desire of wandering, and then with the cold returned home to eat those things which their brethren had laboured in harvesting. And the contention was so strong that Colman built a new monastery for the English on the mainland, and no more is said of the improvident grasshoppers.” It is the last of the Englishmen’s homestead that we, having also withdrawn from the world to make our own harvests, now watch crumbling into the sea.

The second landmark on the strand fascinates us even more. Whenever we walk there at low tide, we find ourselves drawn to a jagged palisade that sticks up, stark and blank, from the shelving sand. It is the wreck of an old wooden sailing vessel that we like to think belonged to the Armada. We keep a wave-worn piece of it, dried to silver, sitting on a book-case and once sent a chunk to the Ulster Museum in the vain hope that it could be dated. 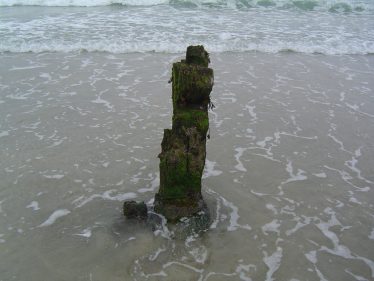 The vessel came ashore opposite a line of reefs and islets that make these hazardous waters at the best of times. For most of the years we have known it, only a foot or two of its ribs has sketched its oval skeleton in the sand, the wood gnarled and black and hard as stone, fronded here and there with bladderwrack and frosted with white barnacles. Occasionally, as at the moment, the sand is swept away, exposing the forward ribs almost to the keel and showing them pierced for the wooden trenails that held the craft together. A neighbour who has measured the wreck when fully exposed to the stern puts its length at 87 feet – the size of a substantial inshore trawler.

The wreck has “always” been there, and almost the best reason for supposing it to date from the Armada is the lack of a better explanation. This is an area if vigorous and colourful oral tradition, as may be judged from Berry’s “Tales of The West”, or Louisburgh’s remarkable parish journal, “An Choinneal”. The wreck of the River Dee, which came ashore with a cargo of timber in 1871, was promptly documented in a song and “there was many a telling on it.” But beyond general belief that the lonely wreck below us was Spanish, and a neighbour’s observation that the ballast was unusual and “like those stones from Greece in the pillars of Westport House”, there is a singular lack of lore about it, which suggests that it predated the population driven west by Cromwell.

It was an Armada vessel, it must have been one of the smallest – perhaps one if the 42 messenger boats that ran errands between the store ship and the big fighting galleons, such as El Gran Gin, wrecked off Clare Island and Falcón Blanco of Inishbofin. Despite the intense Armada scholarship of recent years, there is still no full agreement on how many vessels actually ended up around Ireland’s shores. There were at least 16 and possibly nine more.

Each time our wreck is uncovered to the keel, there is talk of an expedition by some of our neighbours – not to dig for bronze cannon or pewter plates but to amputate the choicest of the great oaken ribs. There are scars to show that this has happened in the past, but today the urgency seems to have gone out of it, so that before anyone actually reaches for a saw, the sand has closed in again.

Thanks to Ethna and Michael Viney