You are here: HomenextTopicsnextMemoriesnext"Hi lads! The mackerel is in"

"Hi lads! The mackerel is in"

The schoolmaster in a small rural school by the sea is doing his best to hold the attention of his pupils for some lesson or other as the school day draws to a close.  Suddenly there is a knock on one of the classroom windows and a truant face appears bringing the exciting news to the class, “Hi, lads! The mackerel is in”.  All hell breaks loose.

The seagulls were our signal that the mackerel were in.  It was time to get our fishing gear in order.  The mackerel chase the sprats, their main source of food, towards the shore and the gulls swoop in noisy attack on the sprats.  The word always spreads quickly to the neighbouring villages. 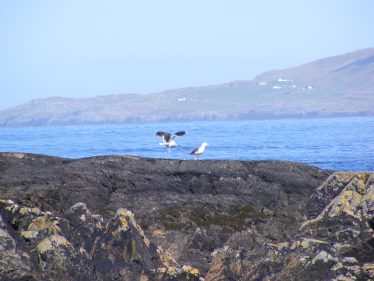 The seagulls coming to rest on Turla Beag, Emlagh

My time as a fisherman came long before the days of modern casting lines with their multiple hooks and reels.  We searched for a length of bamboo or the handle of a hay-rake and fitted them with a length of fishing line and a couple of inches of gut with a hook attached.  On a good evening with this primitive fishing gear, the good fishermen could catch dozens of fish.

However, my own achievements with line and hook were on a par with my achievements on the football field: indifferent.

One year, while on holidays from St. Jarlath’s  College, I was determined to break into the big time and  instead of waiting for the evening, when the pier was crowded, I decided to be there in the morning and make a full day of it.

“If you aren’t able to carry them, come back for the mare”, she joked

As I walked out of the house, bamboo and line over my shoulder, my mother was in the garden working on her vegetables.  She probably felt that I would be better employed if I were to join her in her harvesting. “If you aren’t able to carry them, come back for the mare”, she joked, aware of my miserable attempts to date.  I laughted with her at the fantasy and went on my way.

It was a beautiful August morning and as I walked the one and a half miles to the pier at Roonagh, fish or no fish, it was good to be alive and I rejoiced at the beauty of the world.

As I drew near, I suddenly became aware of a chorus of seagulls screaming.  There they were in the very first of the “Cuainíns” – “Cuainín bhéal a tráighé”.  “The cove  at the mouth of the strand”

I had never heard of mackerel coming in so far south and figured that the gulls must be attracted by some other food.  I was mistaken.  As I got closer to the diving gulls, I could see the activity in the water.  The tiny sprats were leaping into the air to avoid the chasing mackerel, the turmoil in the water suggested there were a lot of fish and I began to loosen my line and prepare to cast as soon as I got close enough. 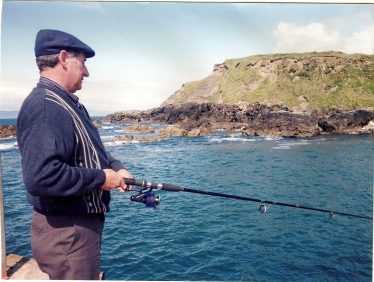 It proved easier than I had expected.  Mackerel are foolish fish, in their greed they take almost any bait and on this occasion their greed had left them stranded in a broad shallow rock-pool.  I watched them for a while in total wonderment: can this be happening to me?

I then stepped into the pool and began to scoop out handfuls of fish on to the sand.  Two neighbours came and stood in wonderment while I emptied the pool.

I noticed that the tide had turned and was now beginning to touch the edge of my pile of fish.  My neighbours helped me to carry my “catch” to the safety of the high water mark.  They offered to watch it for me while I rushed home, saddled the mare and took two large sacks with me back to the shore.

We filled the two bags.  My neighbours took the remaining fish.  Once home, we counted the “catch”.  I remember a figure well in excess of two hundred.  Basins of fish were gifted to neighbours and friends and the rest were gutted, washed clean and salted for the winter.

In a few days I returned to St. Jarlath’s for my final year there.  My story of my fishing exploits was met with general scepticism by my fellow students, but I didn’t mind.  For once I could look back on a successful fishing expedition and who cared if it was by accident?

By now I was learning to count my blessings.