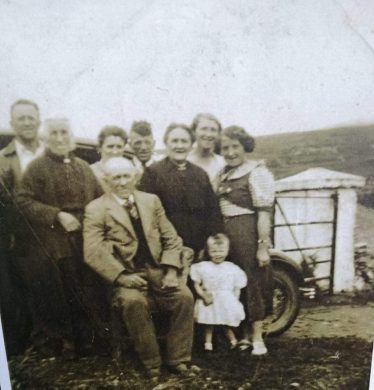 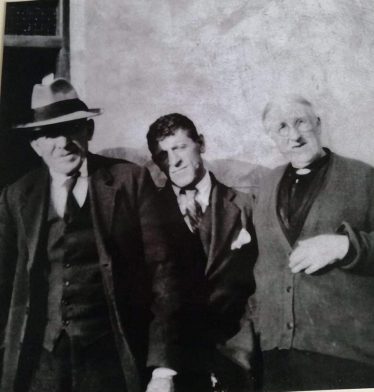 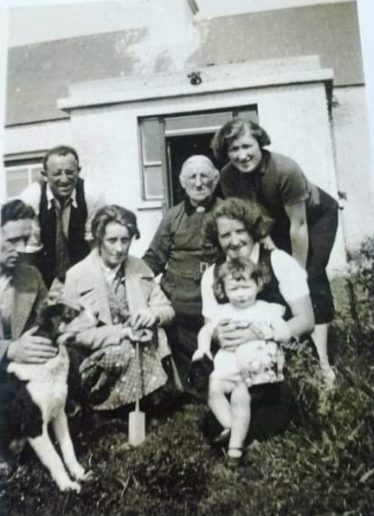 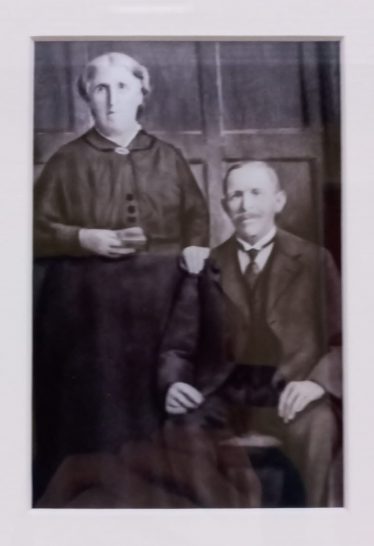 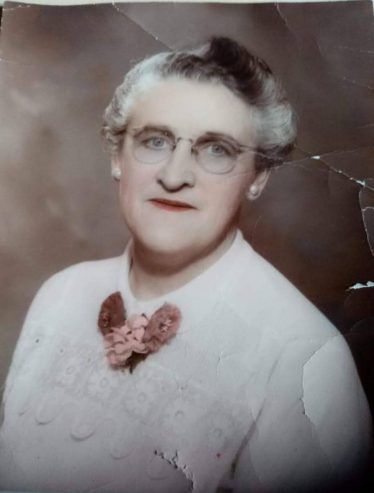 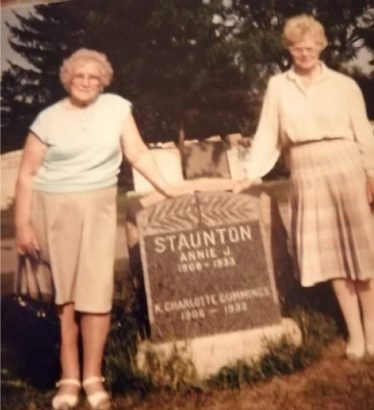 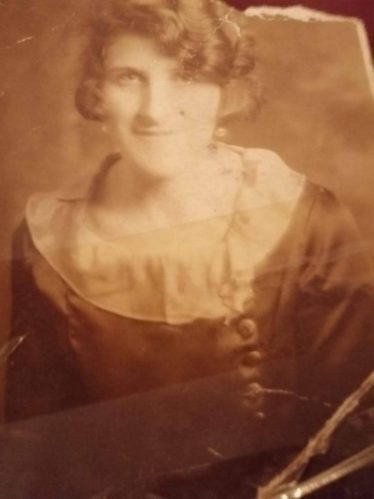 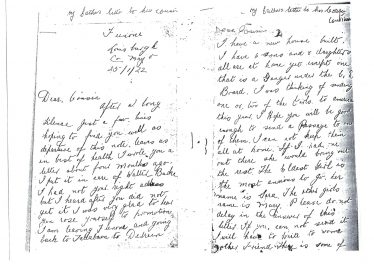 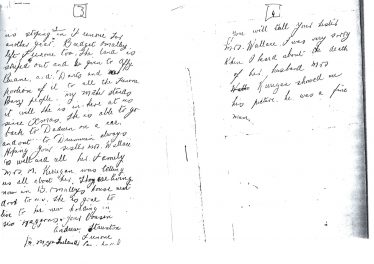 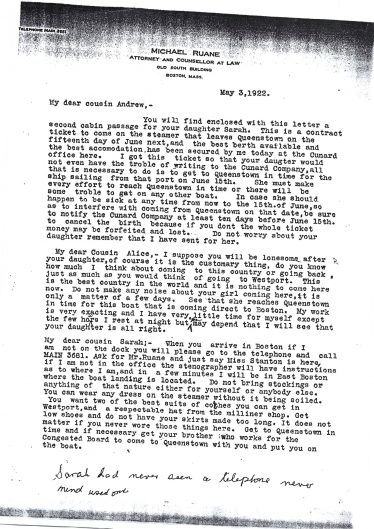 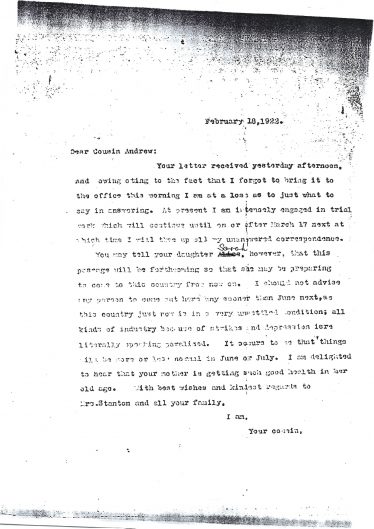 A special word of gratitude to Ciaran Staunton for sharing his remarkable family history with us. Ciaran a native of Thallabawn, now living in New York, has never forgotten his roots and we look forward to sharing the journey of remembering our ancestors.

It was January 25th,1922 during the turbulent aftermath of the Irish War of Independence and the formation of the new Irish Free State when Ireland was on the verge of being partitioned. In the West of Ireland, it was not these historical events that were troubling the heart and soul of 54-year-old West of Ireland farmer Andrew Staunton in Feenone, a village west of Louisburgh at the mouth of the Doolough Valley . What was troubling Andrew as he sat down to write at the table of his two-bedroom cottage, was the economic hardships that every family in Ireland was suffering, for Andrew, the father of 14 children, he knew he needed help for his children.

Andrew was writing to his County Mayo born cousin, a Boston based Attorney, Michael Ruane. Andrew was worried about his family, he had 6 sons are 8 daughters, from 4 to 26, living in a two bedroomed cottage in Feenone Co. Mayo. In his letter he asked Michael for help, specifically he asked Michael to send the passage to America for one of the children who in turn could send the passage for others ensuring them a good life ln the United States of America. Andrew wrote:

“Dear Cousin, I have 6 sons and 8 daughters, all are at home. I was thinking of sending one or two of the girls to America this year. I hope you will be good enough to send a passage to me for them. I cannot keep them all at home. If I had one out there, she could bring out the rest. The eldest girl is the most anxious to go, her name is Sara the other girls name is Mary. Please do not delay in answering this letter. If you do not send it, I will have to write to some other friend”. Andrew continued to wish his cousin well and enquire about his sister Mrs. Wallace, and the death of her husband, who he says was a “fine man.”

On February 18th, 1922, Michael Ruane wrote back to tell Andrew saying “you may tell your daughter Sara that her passage will be forthcoming so that she may be preparing to come to this country from now on.”  However, he added that he would not advise anyone to come to America any sooner than June because of the economic unsettled condition prevailing in America at the time.

” With this letter you will find enclosed a second cabin passage for your daughter Sarah. This is a contract ticket to come on the steamer that leaves Queenstown on the 15th day of June next, on the Cunard line”.

I suppose you will be lonesome after your daughter, it is of course a customary thing…Do not make any noise”. He reassures her not to worry as, ‘This is the best country in the world. You may depend that I will see your daughter is all right…Do not worry about your daughter, remember I have sent for her.”

Turning his attention to Sarah he wrote:

“Do not bring stockings or anything of that nature for yourself or anybody else. You can wear any dress on the steamer without it being soiled. You want two of the best suits of clothes you can get in Westport and a respectable hat from the milliner shop. Have your brother, who works for the Congested Board to come to Queenstown with you and put you on the boat…when you get to East Boston, if I am not on the Dock, please go to the telephone and call MAIN 3681″

On June the 15th, 1922 Sara Staunton left Ireland bound for the United States, Patrick her brother, accompanied her to Queenstown (now Cobh). The journey there had them traveling to Westport by pony and trap, some 20 miles away. From there they took a train from Westport station to connect to other trains to take them to Cobh.

Three years later Sara’s sister Mary made her way to America to be with her.

This saw the start of a number of Staunton’s making their way to the USA, including this writer, who 60 years and one day later, on June the 16, 1982 found himself arriving at the door in Dorchester, Boston of Mary Staunton, yes, that same Mary whom my grandfather had mentioned in the famous letter to his cousin back in 1922.

By 1932, ten years later, as Andrew had envisioned, there were seven Staunton’s living in the Greater Boston area (Sara, Mary, Anthony, Tommy, Catherine Charlotte, Annie, and Alice). Sara had sent the passages home for two of her brother’s Anthony in 1925 and Thomas (my Dad in 1929), and four of her sisters, Mary whom I mentioned earlier, in 1925, Catherine Charlotte in 1928, Alice in 1930 and finally Annie in 1931.

It was not easy for the new Staunton family in Boston and that was not only because of the collapse of Wall Street. Tragedy and death came fast and furious and one of the first major purchases the Staunton family had to make, was not real estate, but a grave in a Cambridge Graveyard. Catherine Charlotte, married to John Cummings, died during childbirth in 1932, while giving birth to twins, the baby boy John Cummings lived but his baby twin sister died. This was closely followed in 1933 by the death of Annie Staunton, from TB at the young age of 26 years.

While the American Staunton family were making a new life in Boston, in Mayo, Andrew Staunton and his wife Alice were experiencing harrowing times. Ireland was now at the brink of a Civil War. In the previous War of Independence three of their children took an active part in the struggle. Patrick secretly trained IRA volunteers at night, Anthony was an active volunteer and Thomas was an IRA courier. Despite these goings on and their stance towards the presence of the notorious Black and Tans and the RIC, the family survived the war with only one injury, a broken finger.

Anthony left for America in 1925, and Thomas followed shortly after.  Tragically, Patrick died from pneumonia in 1928.

Having watched and worried through all of this, Andrew now witnessed families from rural Ireland getting massive tracks of their lands, which the British landlords had taken, returned to them. In their part of Mayo, most of the land was owned by Boswell Houston. Local authorities redistributed land Houston had taken, some 40,000 acres which and at one stage held 26,000 sheep at one gathering. Houston had leased the land from Lord Lucan who infamously had evicted 300 families in one day in the Thallabawn area where Andrew Staunton was now moving his family back to. Ironically, Andrew Staunton’s family had been one of the 300 families who had been evicted more than 80 years earlier.

Ireland was going through a debate of sorts about the recent partition and accepting the 26 out of 32 counties as the Irish Free State. Andrew welcomed the new state, while his sons who had fought against the crown were opposed to the partition of Ireland and supported what was known as the Anti-Treaty argument. As the conversations raged around the dinner table a fourth son, John up and joined the Civic Guard (now known as the Garda Siochana, guardians of peace.)  a pro- treaty-pro government national unarmed Police force.

Alice and Andrew were soon settled into their newly built house and newly created farm in Thallabawn, beside the his original home before his family were evicted by the British in the 1840s’ Most of their children were still living with them, however four more of the children took the boat to England, Wynne, Bridie, Noreen an Austin. Before their deaths Andrew and Alice sadly saw the deaths of Annie (TB, 1932 Boston) Catherine Charlotte (childbirth,1932, Boston) Patrick (pneumonia,1928, Mayo) and Andrew Jr (Hepatitis 1942, Mayo)

Fortunately, many of their sons and daughters settled and married in the USA, England and Ireland, giving Andrew and Alice a lineage of many grandchildren (30) all still alive except for my sister, Anne, who died at birth an much later the death of one of their great grandchildren in America, the death in 2012 of our son Rory. Rory was only 12 years old when he succumbed to unrecognized and untreated sepsis.  Rory and his many cousins loved to visit Thallabawn every summer, where they ran as one large group of laughing happy children without a care in the world part of a legacy of Alice and Andrew Staunton.

With special appreciation to my Aunty Wynne and her daughter Anna who preserved this history for all of us.