You are here: HomenextTopicsnextSpinning Yarns In The CommunitynextTraditional Song And Music

The local dance hall was known as Mickey Keane’s dancehall. Lots of big named bands and groups came to play in this dance hall. There was a story of how Mickey Keane was up in court to renew his licence and the judge asked him did he have flushing toilets. He replied that he had and everybody wondering what kind of flushing toilets they had in Aillemore. He went on to explain that there was a stream coming through, it came in one end and out the other and that was his flushing toilet. 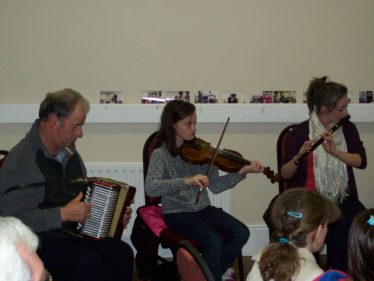 There was another dancehall over in Mullagh called “Ted John’s”. It was usual to have a dance here on Christmas night as no other place would be open. There was black frost and it was cold standing around the door as the floor was always kept free. One person cycled all the way over to it and the chain broke on the bicycle and it was sliding all the way. There was a big flat rock outside Ted John’s hall and those who had no money could hear the music outside and dance a half set on that rock. Some people remember buying cows in it years later. The clergy were very much against dances. They didn’t want anybody dancing at any time of the year. But when Mickey Keane’s hall and Ted John’s hall opened the priest changed his mind. He decided to develop the parochial hall and announced from the altar “Dancing is a very good, healthy pastime, any young lad should go and bring his sister, but you’ll always greet the Blackguards that will bring someone else’s sister”. 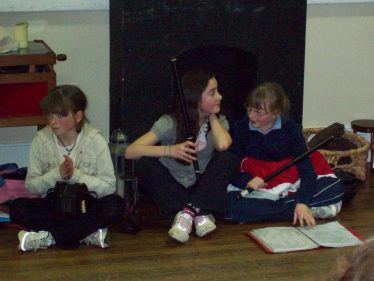 There was another dance hall in Lecanvey and it outlasted the others up until the seventies. One man said he came home from England in the seventies and used to go dancing six nights a week. The only night there wasn’t a dance was a Monday night but he had a car. Tuesday night in Newport, Wednesday night in the Halfway in Islandeady, Thursday night in Louisburgh, Friday night in Aughagower and a choice in Castlebar for Saturday and Sunday nights.

Dancing was an innocent form of entertainment and there were always opportunities, dancing in the kitchen at station nights or when the Yanks came home there was a dance held in their honour. There was plenty of emigration in the area and there was always a farewell party held with plenty of dancing. The dancing went on all night until morning and the person who was leaving would be brought straight from the house to the station. All the old people would come out to wish them well as they left. It was a very joyous occasion up until the last hour and lots of people remember that. Sometimes the car would go all the way to Shannon airport with the person leaving. Most musicians were from the Cregganbawn area: Pat Kilcoyne, Pat Thomas John, and Peter Corrigan. Michael Hunt was from Devlin. But there was no shortage of singers or dancers. 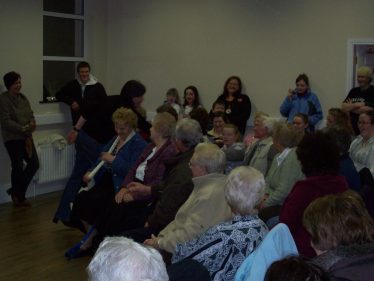 Basil Morahan (Dan the Street Singer) from Louisburgh, started “pops” for young people in Louisburgh hall on Monday nights. It was two and six pence to get in and it was brilliant. Priests oversaw the dance halls and if they saw two people dancing too close together they would come over and “rattle their heads together” and put one on each side of the hall and they were lucky if they didn’t get a sermon about it again that Sunday at mass. No close dancing and no refreshments in the halls.

The showbands had come in at the time, but while the seven weeks of lent was on, all the show bands went across to England and played in the dance halls there. All the Irish over there really enjoyed that.

The Féile Chois Cuain, Irish music festival takes place every year in Louisburgh on the May bank holiday It is running for the last fourteen years. One of the best fiddle players known, Brendan McGynchy from Armagh, came to Louisburgh and visited Mike Prendergast. Mike used to fix clocks and make boats and fiddles. There were clocks and fiddles all around the walls in various states of repair and every clock was chiming at different times. Brendan went in and played Mike’s  fiddles and he said that was a treasure. Mike could play and it was a pity his house was never filmed.

Music was handed down through families, not through teachers. There was always a dance at the crossroads on bonfire night the 23rd June. St. John’s Night was a good night on the square in Louisburgh with a big bonfire. It was the old midsummer pagan festival that then became Christianised all over Europe. 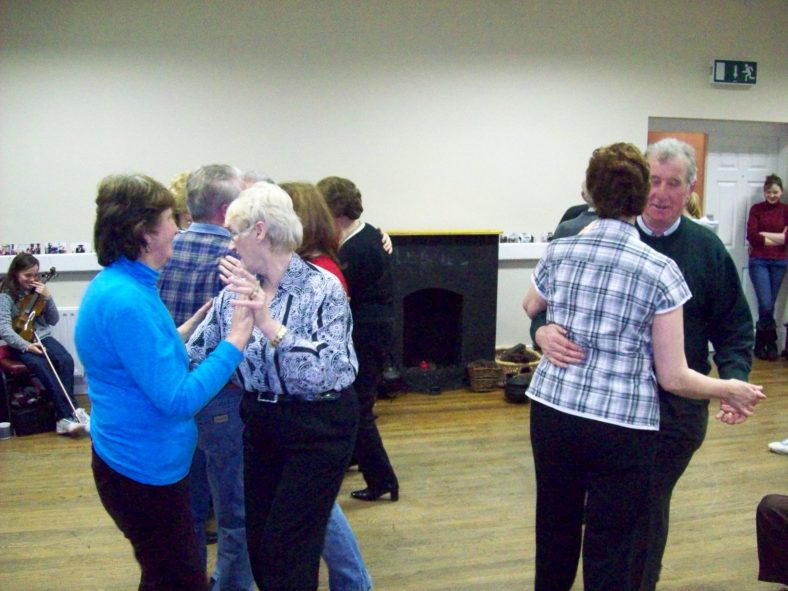