You are here: HomenextTopicsnextCleeve Making

zoom
Thomas Burke, Doughmakeon bringing home the turf with the horse and cliabhs in the late 1920's
Austin V. O'Malley 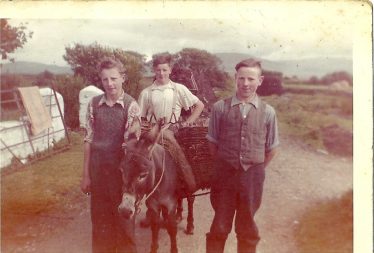 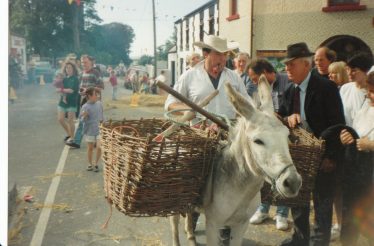 The Art of “Cleeve” (Cliabh or Cleave) making was common practice in the Killeen and Louisburgh area for many years. Sadly this tradition has long since passed as there is little or no demand due to advances in farming machinery and commercially produced baskets.

Traditionally there was two types of indispensable cleeves, “Pardogs” and “Loidins”. The Pardogs opened at the base and were used mainly to put farmyard manure on tillage ground. The Loidin had many uses from bringing potatoes, cabbage, mangles and turnips from the fields to gathering the turf home from the bog. The person who used a cleeve carried it on their back by the aid of two ropes attached to the top and bottom of the cleeve. These ropes were called erishes and were frequently made from hard twisted hay or straw ropes known as “sugaens”.  Cleeves were made of various sizes according to their intended use.

Rods called “osiers” (willow) were used to make the cleeves and were readily grown and harvested around November time. The stronger rods were cut first and put in bundles of 100. These rods were used to form the “ribs” or “buinne” of the cleeve. The weaker rods were used for weaving the intricate cleeve. With all the materials prepared it would take a day to make a pair of cleeves. Sometimes “Coll” a hazel wood was used, it gave a better wearing material however it was not as flexible as osiers with most cleeve and basket makers preferring the oisiers rods.