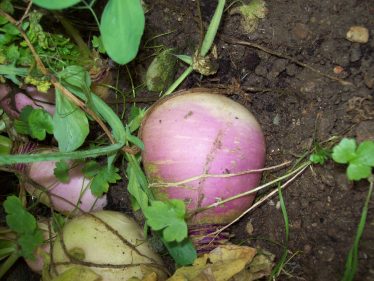 In days gone by nearly every farmer grew a few drills of turnips. They were for animals and human consumption, and at this time of the year they served yet another purpose; they were hollowed out and made into jack-o-lanterns at Halloween. Farmers would draw home the turnips on what was called a ‘drug’ more commonly called a ‘slipe’. It was a wooden sled which was used to haul small loads over marshy ground into which loaded wheels might sink. The turnips were heaped up and covered for the winter just like the October gathered potatoes.

The largest turnip would be selected and hollowed out to within an inch of the peel and eyes and mouth would be cut out. Discarded chicken bones where used to make teeth and a stub of pointed carrot completed the face. A bicycle lamp was placed inside to provide illumination. The head would be mounted onto a mop-stick and many a young child would have run down the lanes and hid in a small thicket at the edge of the road, waiting for some unsuspecting cyclist to arrive so that the flash lamp could be switched on and terrify the passer by. 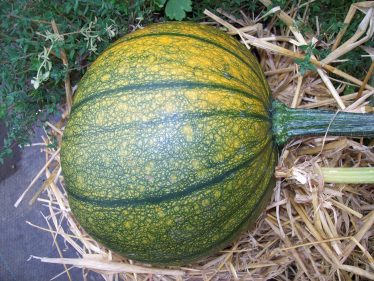 It is believed that the background to the practice was a story of a mean-spirited man called Jack who was turned away from heaven and from hell. The devil gave him a coal from his burning fire and he put it in the shelter of a hollow turnip so that it would light his way as he wandered around the world looking for some place to stay.

We have left our turnip days behind us and now we use pumpkins after the fashion of the Americans who substituted the bright orange fruits of the New World for the clay-tailed turnips. Some older people thought that on All Souls Eve, the spirits of the dead would be as thick in the air as the grass was on the ground. They would leave the fire lit through the night and the door was left unlocked so that the spirits would not feel unwelcome. 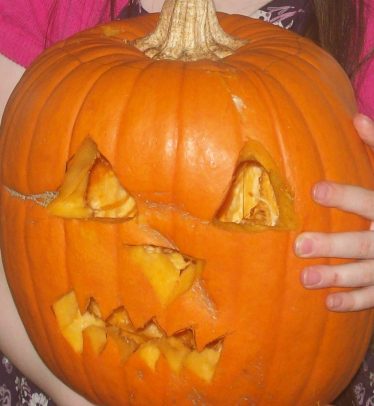 Hollowed out to make a face

The season of fairs usually ended in October. The slaughter and preservation of animal meat began and there was feasting. The fall of leaves, the drooping curtain of darkness and bite of winter frosts was the cue for Christians to remember the souls of those still in process of purification – still in purgatory. Bells were commonly rung to comfort them and to call people to pray for their salvation. In Catholic parts of Britain, parishioners used to gather in a field around a pitch-fork of burning straw, praying for their family dead until the straw burned out. Sometimes, the field that was most used for the ritual ended up being called ‘purgatory’ field.

The origins of the name Halloween lie in the Christian feast of All Saints; the hallowed or holy ones. It was inaugurated in 835A.D. The feast of All Souls came later. These supplanted or tried to put a Christian veneer on the pagan practices of the feast of Samhain. It was then believed that the spirits of those who had died in the preceding year would return, searching for bodies to inhabit. This was their only hope of afterlife.

The Celts, believed that the veil between the worlds of spirit and matter, between space and time, were suspended during this time allowing the spirit world to intermingle with that of the living. To scare away the spirits the ancients donned masks and disguises. They took part in tricks designed to confuse and cause disorder and used fire and latterly, fireworks to scare them away. 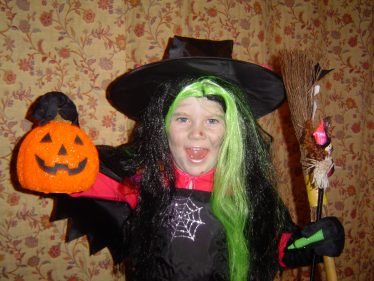 Roman culture celebrated the feast of Pomona, the Roman goddess of fruit and trees. This became integrated into the festivities of the season, giving us apple-dunking and nut crunching. The custom of ‘trick and treat’ originated in a European custom called ‘souling’. Early Christians walked from village to village begging for soul-cakes; square pieces of bread with currants. The beggars promised to say prayers for the dead. This custom mutated in America, into what we now know as ‘trick or treat’.

The tradition of a witches gathering, having flown in on their broomsticks, accompanied by their black cats comes from a belief that such gatherings were bi-annual, taking place on May Eve and on All Hallows Eve. Some families would mark this event by gathering yellow marsh-lillies and throwing them on the roof of the house and on the dung-hill as well. This was to keep away the witches from the household and to ward off their charms and the harm they were capable of.

Today we still perform some of these traditions, may be out of our human need for rituals or maybe because we struggle with the great questions of life and death and of good and evil.