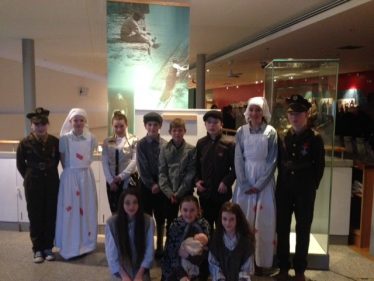 On Saturday 3rd December as part of the Museum’s public programme, the Museum of Country Life, Turlough hosted an event called ‘Our Untold Stories’.

It highlighted the excellent work being carried out by iCAN members in researching and sharing information around both 1916 and WW1.The event was part of the National Museums’  ‘Beyond Sackville Street & The Somme’ programme. The idea was that each group gave a short presentation on their 1916 commemorative project.

We joined The Holy Family National School, Killeen in their own commemorative project. Every second year Mary O’Malley and I approach Brid Grady, the school principal, with project ideas for the 5th and 6th class and every time the school rises to the challenge. The school kicked off their project with the presentation ceremony of the Irish Tri-colour flag and the Irish Proclamation. The student’s excitement and thirst for knowledge led Mary and I to introduce our 1916 project idea to them. Our idea was simple – Who were these men who signed the Proclamation?

So the first part consisted of researching the main leaders of the Rising. Quirky information that only a child would ask, like how many siblings did the Leaders have? Where did they go to school? What did they look like? Were there any women leaders?

Each student ensured their work was carefully recorded, including references, names & page numbers of books researched and using computers with the internet as a tool. This helped them understand the work of a researcher. They worked in pairs and displayed their findings on posters using their own unique styles. They had the task of standing in front of the class and delivering those findings to everyone. Public speaking and short Q & As left both Mary and I in no doubt that these students were interested in the whole project process and their enthusiasm for more knowledge was infectious.

Form there they researched the main organisations involved in the Rising; The Irish Citizens Army, Cumann na mBan, The Irish Volunteers & Fianna Eireann. Using similar methods, they completed this task and presented the findings to the class. As the interest was growing, attention turned to the local movement and what, if any, involvement did Louisburgh have in the 1916 Rising?

So where better to look than in our county Library in Castlebar? On the bus journey to Castlebar, the students even surprised us as they sang rebel songs. Maureen Costello in Castlebar library was extremely helpful and kind, showing us sourced books and pointed the students in the right direction for many local events & photographs, including Westport Volunteer meetings & old newspaper information. All the students also had access to the microfiche machine and we even got to photocopy some material to take home to study. For some students it was their first visit to the County Library, an experience which was made very special by Maureen’s patience & help.

To round off our research we all travelled to Dublin to see first-hand what the 1916 rising was all about. We took the 1916 Freedom Tour of Dublin which opened all our eyes to the horrors of what happened during that pivitol week in Irish history. This trip was both exciting and scary at the same time. We were reminded of the seriousness of the Easter Week, but also got to compare it with modern day living in Dublin, making the whole history come alive for us, which you couldn’t get from books.

Alongside our project the students were studying the book “Guns Of Easter” by Gerard Whelan. This inspired them to write, perform and direct their own 1916 play “The Road To Independence”. Not only did they perform this for local schools and the community in Louisburgh Town Hall, they were also invited to perform the play at the Westport Town Hall,for schools and the community in the Westport area. This was a huge success.

All along Killeen National School students were determined to write their own record of what they learnt about 1916 in this the Centenary year 2016.