You are here: HomenextPlacesnextBuildingsnext"The Garage" Louisburgh 1923 - 1999

Harney’s Garage , Chapel Street, Louisburgh was established in 1923, on the site of the old Chapel by my late Father-in-Law, Tom Harney. 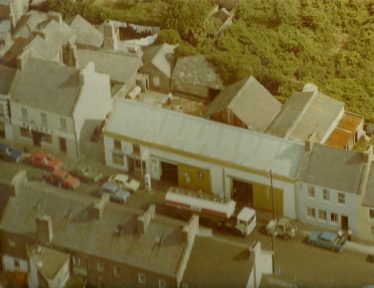 He sold and repaired cars, cycles and tractors, and stocked parts for them all. He also sold petrol, diesel and parafin oil. Before the ESB came to Louisburgh he had a wind charger and supplied electrictity to the people of Chapel Street. He charged batteries for radios – which were one of the few links to the ‘outside world’. He also ran a taxi service.

“The Garage” was a local meeting place for all when they came into town. There were always people gathered having a chat at the door, catching up on all the local news. It was a very busy place on a Fair Day, with farmers discussing sheep prices and Islanders stocking up on barrels of petrol or diesel and bicycle parts. We were often asked to repair various items – putting a patch on a wellington, repairing a leaky kettle or saucepan! It was the first port of call for people when something needed to be mended. 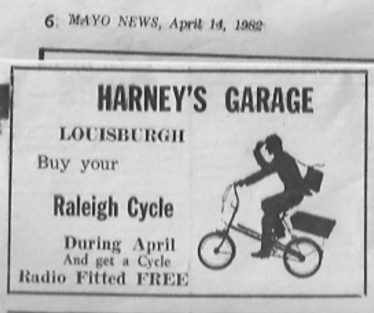 Many local lads came to work in “The Garage” as apprentices – even when they left to move on to other work, coming back to “The Garage” to visit was like coming home.

Tom Harney passed the business on to Oliver and I in 1968. We operated the business together until Oliver passed away in 1996. I kept “The Garage” open until 1999 – I then sold it to Mayo County Council.

I was disappointed Mayo County Council did not see fit to preserve any part of the building, but I was lucky that I had the Holy Water Font removed by John Burke and then sandblasted by John Coffey. 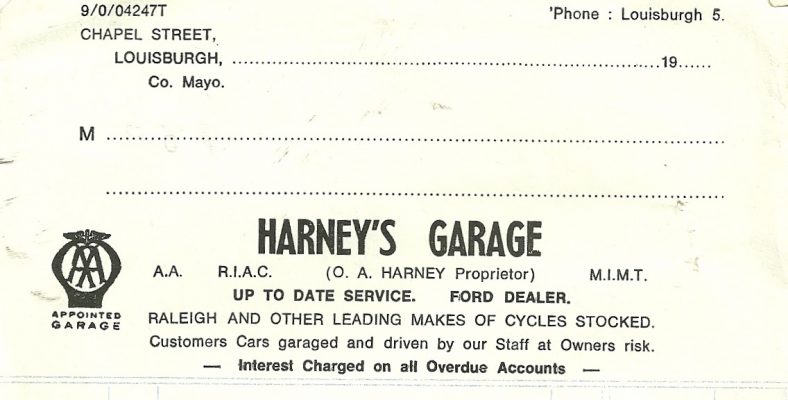