You are here: HomenextPlacesnextBuildingsnextMemories of Killeen Church (founded 1897) 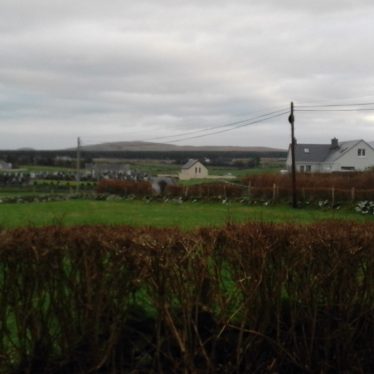 This photograph of Killeen Holy Family Church means a lot to me. It represents the view from our front door, of this church that was looked after by at least three generations of our family, O’Malley’s, Cloonty. My grandparents, John and Ann O’Malley were sacristans/ caretakers, and when my grandmother Ann died in 1967, my father and mother, David and Alice O’Malley, and us, their ten children carried on the tradition. In hindsight, it was an advantage having so many children, because there was always someone to help out with all the jobs!

Our daily lives revolved around what needed to be done in the church, depending on what service was taking place that day. The church always had to be opened in the morning, and closed in the evening. Everyone in the family helped out in different ways. Sunday was the most important day of the week, with two masses at 9am and 11.30am. My father, Davey, was “front of house!”, and often went to both masses. He always wore his suit and tie, and his Sunday cap! He opened the church, talked to the mass servers, talked to the priest, and ensured that everything was in its place for a smooth running of the Mass. Then, he sat at the back of the church beside the collection box, a small, wooden, rectangular box into which people dropped their offerings. At the end of Mass, he brought the collection box into the sacristy where it had to be counted and recorded, and then bagged and given to the Priest. If there was a funeral or a wedding during the week, my father was always there, as they were important occasions and had to go smoothly.

My mother, Alice, and some few of us would always clean the church from top to bottom on a Saturday. As we got older, we were able to do it ourselves. As the eldest children in the family left school and home, I often had to clean the church on my own in my teenage years. It was my Saturday job! I always liked being in the church, even on my own, as I find it a peaceful place.  Sometimes, if a radiator clanked, or I heard some other strange noise, my imagination would go into overdrive, and I would convince myself that there was a ghost in one of the confession boxes, and I would make a rapid exit from the church!   All of my brothers served Mass as their turn came up. So, no matter what service happened during the week there was never a shortage of Mass servers!  This often happened in the case of a funeral, where someone had died suddenly, and a Mass server was needed quickly.

We had to ensure that certain things were always done in the church. The Sanctuary Lamp had to be lit at all times, because that shows the presence of the reserved Eucharist in the Tabernacle behind the altar. The lamp represents the presence of Christ, the Light of the World. The Holy Water font in the hallway had to be full, and the candles in the Candelabra replenished. Before Mass, Wine and Water in the little cruets, were laid out on a side table with the Paten, which the servers used to hold under your chin at Communion time. The Chalice and the Book of Gospels were placed on the altar, and the bell put out for the servers. Then, in the Sacristy, the priest’s vestments were laid out. The electronic bell had to be set to ring before Mass, and there was a different toll for funerals. There is a ceremony in preparing the altar for Mass that takes place before the ceremony of Mass!

Whenever a new priest came to Killeen, he would come back to the house and meet us all, and my father would give him his set of keys, and give him the rundown on Killeen.  Our faith is handed down by our families, and being so involved with Killeen has given me my faith. When I go abroad on holidays, I always drift towards a church. I have seen some beautiful churches; from a tiny, church tucked into the square in Alvore, Portugal to the magnificent opulence of St. John’s Co-Cathedral in Valetta, Malta where two Caravaggio paintings were on display; and of course St. Peter’s Basilica in Rome.

It was a pleasure and an honour to look after Killeen Church. There always was a wonderful community spirit, and there still is. The people of the Killeen community are great people, from Thallabawn to Cregganbawn, and everywhere else around.  Being the church sacristans is a worthwhile, rewarding and important job.  From Baptisms, Holy Communion’s, Confessions, Confirmations, Weddings, Ordinations and Funerals, our church plays such an important role in marking and celebrating the important milestones in our lives that bring the community together. I hope it continues for a long, long time to come. As a family, we had a unique experience, and it gave us a unique insight and understanding into the day to day workings of a Catholic church. I am very grateful for this experience