You are here: HomenextPlacesnextBuildingsnextDance Hall Days

Set in a most scenic area with Croagh Patrick to the north and looking west to Clare Island and Inish Turk this building looks today like any farm shed. It was no ordinary shed back in the last century when it attracted huge crowds on a Sunday night and its music echoed for miles as revellers danced ‘til dawn. If those stone walls could talk they would have interesting tales to tell. 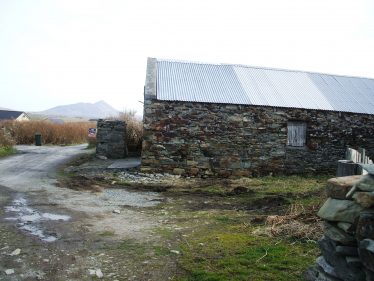 It was the venue for all social gatherings in the Killeen half parish from the mid 1920s right up to the 1960s. It was where love stories began as it was the favourite haunt for the young and eligible of the time. In fact it was the only dancehall in this area at the time. Mc Dermott’s in Louisburgh was opened in the 1950s and the Louisburgh Parochial Hall in 1943. The nearest competeing country dancehall up to that was John Gibbons’ (John Ted’s) of Mullagh near Kilsallagh which was opened after Keanes.

The proprietor was a native of Aillemore. As a young man he went to the US and returned with some money and a lot of ideas. After building a modern house for himself on the family farm he set about building the hall. It was built of stone gathered in the locality, had a galvanised roof and a concrete floor. There was a tiny cloakroom for the women but no indoor toilet. In the early days lighting was by paraffin lamps and candles, it got electricity in the late 50s. In 1940 Mickey decided that the hall wasn’t big enough so he made it wider by some 4-5 ft. He had to knock down one sidewall and rebuild it. This was a big undertaking but it didn’t deter Mickey who was strong and energetic.

Provided by local musicians like the Kilcoynes from the Cregganbaun area, Pat who played the accordion and Pat from Cregganacopple, who played accordion and drums. Another Pat (alias Pat Bawn) also played accordion Anthony (nicknamed Donnelly) was a fiddle player as was Michael Hunt of Devlin. Other musicians who played there were Johnny Hyland from Carrowmore, Jackie and Jimmy Toole from Dooaghtry. Traditional music was popular in the earlier times and country and western became popular in the 50s. Sets, waltzes, foxtrots and quicksteps were the dances of the time. Mickey used to prepare the floor with candle grease and soapflakes so that the dancers glided smoothly and to deep down the dust.

Admission was 6d. and as it got late it was reduced to 3d. Mickey had his own marketing strategy. At one stage when he felt he was losing custom to the hall in Mullagh he put on a special offer of “free admission for ladies”. This worked a treat and he got most of his clientele back the following Sunday night. The 6d. then was hard got. A local lady recalls how they conned Mickey when they didn’t have the 6d they would have a miraculous medal with the eyelet cut off it. Mickey never made an issue of the money and never turned anyone away. He enjoyed meeting the young people and it wasn’t all about money.

Transport was mostly the bicycle and ladies usually walked to the dance sometimes over land wearing Wellingtons or strong shoes with their dancing shoes under their arm until they got to the hall. My grandfather Pat Keane had a shop close by and I often heard them say that the ladies who had travelled a distance would come in and change their shoes. It was common for the dancers to come to buy cigarettes and sweets on their way to the dance. The package of woodbine was subdivided into 2s and 3s. The men came on bicycles and would often give one another or the ladies a lift on the bar. People travelled from as far away as Drummin, Bundorragha and Lecanvey on a regular basis.

The Hall became a picture house in the late 40s. A picture company would come and stay for a 4 night stint and put on a selection of films for that time.

The local drama group used Keanes to practice and perform on an annual basis. Some of the plays they produced were:

COBWEBS GLORY (about a greyhound) owned by Johnny Gibbons

The travelling road show came in 1953. An Englishman called Albert and his wife took over the hall for a year and this brought more variety in entertainment. They had Bazaars where you bought tickets and you could win a variety of prizes. They had singing and dancing competitions and even a knitting competition. Paddy McGreal Derrygarve was a regular winner in the singing competition and Mary Jennings of Aillemore (a native of the Aran Islands) could not be beaten at the knitting. People travelled from as far away as Aughagower for the wrestling matches. It was an Aughagower man called Casey who was a regular winner against Peter McNally from Feenone.

Other travelling entertainers came for stints in the 1950s and 60s.The McCormack family and the Kelly family are the best remembered of these. They set up home in Aillemore and lived in a caravan for the duration of their stay which could be for 2-3 months at a time. At one stage some of their children went to Killadoon School and the family became part of the community. Past pupils of Killadoon remember Jean and Precilla from the road show that joined them in school for a term in the 1960s. Among the performers were singers dancers and magicians. They also had night of Pongo which was similar to bingo. This attracted all age groups. One of their methods of advertising was by loudspeaker. They also put up posters and of coarse word of mouth. They drove around the area with the loudspeaker giving details of what was on offer that night and there was always a tempting selection.

The FCA used Keanes as a training centre throughout the 1960s and 70s.Local youths couldn’t wait to be the required age of 15 to join the FCA. They enrolled and met in the hall every Wednesday evening for drill under the guidance of Paddy Hoban, Cecil Adams from Westport and other officers.

Mass was celebrated in the hall in 1971 while Killeen Church was being renovated and this was the last time that the hall was used by the public.

The hall is still standing but is used for a different purpose now: To house animals.

A lot of the love stories had happy endings since and it was in Keanes that many married couples in the area first met.